If I were the mathematical sort, I would try to calculate just how many hours there were between fall and spring semesters at the university that my two oldest children attend.

But as I have a hard enough time counting how many times I’ve squatted on a ball or lifted a weight over my head when I work out, I am going to bypass all addition and assume it’s been around 525,600 (which is a standard measurement of something according to the song from “Rent”).

How does one fill all of those hours between final exams and buying new text books, especially when one’s been forbidden to get stoned in one’s own basement?

Hmmm … well, there’s always exercise and then eating things like mashed potatoes in the afternoon or barbeque potato chips at midnight to balance any healthy benefits of that time spent at the gym.

Then there’s the new PS4 console in the basement that the 11 year old got for Christmas, which the older brother has probably logged more hours playing FIFA and NBA games on for hours at a stretch than the gift recipient.

And thank God for “Criminal Minds,” which seems to be like one never-ending episode playing at all hours in my family room and – while I’ve never seen an entire episode myself – I’ve gathered always seems to involve the removal of some poor victim’s eyeball or eyelid and earnest detectives trying to find the bastard who did it.

We’re starting the fourth and final week that the kids are home for break and it’s gotten so boring around here that my 21-year-old son actually volunteered to pick his younger siblings up after school one day last week. He’s also done some grocery shopping for the family and taken his little brother to the barber shop for haircuts.

Not for nothing, but I’ve likened this kid to the big brother on the ABC show “The Middle,” which is a thinly-veiled representation of my life, minus the very tall husband, and frankly I’d like to sue someone for infringing on my hard-won material.

Axl Heck is the classic teenaged oldest brother: He thinks his parents are “lame,” his younger sister a “dork,” and is always walking around in his boxer shorts, a habit I abhor. 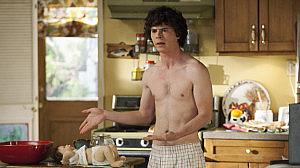 (I am sorry but at a certain point, even though I spent years toweling you off after baths and wiping your bottom, I do not want to see you in your underwear. We call that having “healthy boundaries.”)

Coincidentally, the TV in my kitchen was turned to an episode of “The Middle” while I was making dinner the other night and one of the plot lines of the show was how bored Axl was between high school sports seasons.

He’s seen in various poses in his boxers complaining to his mother about his plight while draped over the couch or lying on the kitchen floor with his bare legs propped up on the refrigerator.

“Why don’t you try vacuuming?” his mother suggests and before you know it, Axl is not only vacuuming the rugs, he’s working with the attachments and taking the job more seriously than school and certainly his family.

In a later scene the mom is lying on the couch eating popcorn and taunting her vacuum wizard with how she can toss a piece in the air and catch it in her mouth or even eat the popcorn off her shoulder.

“Nailed it!” she cries after gobbling some off her shirt and spilling the rest onto the couch, making her son crazy with the mess.

Oh, how the tables had turned.

It reminded me of how annoyed my older son was when he went to pick his little brother up from school last week during the polar vortex and found himself sitting in the parking lot for about 20 minutes along with all the moms in town in their SUVs only to learn that his brother had wrangled himself a play date and didn’t need the ride.

“BLERGING BLERGY BLERG,” he shouted at me when I called his cell to tell him the news.

He was clearly agitated but I told him to hang out and wait for our neighbor, who still needed the ride, only to learn five minutes later that he was invited to the same play date.

“BLERGIN BLERGIN BLERGER,” my son choked out upon learning the most recent development in the 5th grade social scene. He had clearly lost his marbles at having wasted all those valuable minutes in the parking lot approximately 1/8 of a mile from our house that could have been spent playing Assassain’s Creed or looking in the refrigerator.

He cursed his brother, the little neighbor and me for conspiring to ruin his life and stormed into the house to yell some more before retreating to the basement and the comfort of PlayStation.

Welcome to my world, I thought merrily as I returned to stalking people on Facebook.

I really can’t wait until he has teenagers.

And may they all be girls. Like, four of them, who think he is the most annoying person in the world.

It’s going to be fun. I’ll make the popcorn.