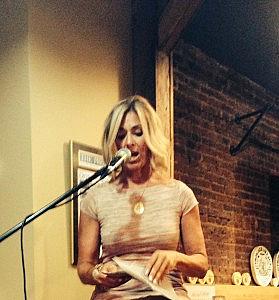 For the three of you left who haven’t heard the news, last week I got to pretend for one night that I was a successful writer.

And it was great.

Some friends had thought it would be fun to invite a bunch of people to come hear me read some of my work in hopes of maybe introducing some new readers to my blog. And plus, it was an excuse to get a bunch of women together to drink wine. Who’s not up for that?

So, they invited a bunch of their friends and about 50 women showed up at a local cheese shop for an event that was billed as “Wine & Words With Amy;” two of my favorite things, all in one room. We stood around and drank some wine and noshed on snacks and then I got up and spoke a little and read a few selections from my blog and then we drank a little bit more.

But of course, not everything was perfect. There were a few glitches and things I’d do differently if I ever had the opportunity again to do something akin to it. Herewith, the top five things I learned at my inaugural reading:

Many thanks to all of you who came out and to the many people who told me they wished they could have come. Perhaps we’ll do it again some day because we always need a reason to get out and drink wine.

In the meantime, check out some videos from the night.

6 thoughts on “5 Things I Learned From My First Reading”