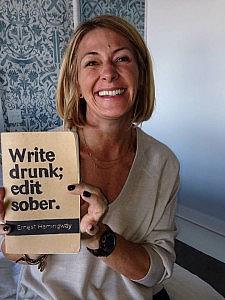 My trusty notebook is filled with lots of crazy quotes my kids say and ideas for future blog posts. In other words, it’s a gold mine of content.

For many years while my children were going through our local elementary school, the highlight of the long winter months would be the celebration of the 100th day of school.

To commemorate that special day, inevitably the kids would need to bring in 100 of an item to be counted or added or divided or something math-related. Over time, I got pretty good at hot gluing things like pennies and buttons onto old baseball caps or poster board without burning my fingers or dripping globs of the sticky stuff onto the kitchen table.

So when I noticed last week that I was nearing the 100th post on my blog, I really wanted to break out the gun and start gluing stuff to celebrate.

When the blog was just something I talked about (rather than did anything about), I worried that I would run out of things to write about. But luckily, kids and ex-husbands make for excellent blog fodder. They’re an endless source of content.

And while I still struggle with how much is too much information to share with the general public, here I am at Post #100 with a notebook full of ideas for future posts and life constantly providing other items of interest to blog about.

So instead of gluing things together – and really, we probably have enough boxes full of things our kids have stuck together – I thought I’d reshare the top 10 most viewed posts of 2013, as this also coincides with the almost one-year anniversary of the blog’s launch.

I have to say, it’s really exciting to have created something from scratch and watched it grow. A blog is like a child you have total control over. I can tell it what to say, not to talk with its mouth full and to go to bed at bedtime and, damn, the blog always does what I say.

But most importantly, blogging about my life has given me great comfort learning that I am not alone. We all are trying our best — balancing the good with the bad — and want to know that our voice has been heard.

I love hearing from all of you and am thankful for your support. Thank you for listening to me.

Looking forward to the next 100. 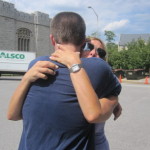 There’s a picture pinned to the bulletin board in my kitchen, half hidden by silly greeting cards and bumper stickers that I fancy, which is our iconic family back-to-school photo. In it, my oldest two children stand on the front step of our old house, a basket of late-summer impatiens drooping behind them, on the occasion of the eldest’s first day of preschool, just shy of his fourth birthday. (READ MORE … )

In the almost four years since my ex-​​husband moved out, there have been a few times that I really wished the guy was still around. Like when it snows. Say what you will, but that man could shovel like a motherfucker. (READ MORE … ) 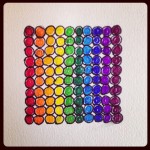 I was in a huge rush to get married and had the ring on my finger by the time I was 23 and two years later, I was pregnant with my first child. I am familiar with being the one to provide all the firsts as the oldest sibling in my family and oldest grandchild on both sides of my family. But I also stood alone in my close circle of girlfriends in thinking that getting hitched and knocked up so young were especially good ideas, so became the first among us to sail into those unchartered – and as it turned out – stormy waters. (READ MORE … )

Over the course of the, like, bazillion hours my college girlfriends and I sat around talking during a girls’ weekend earlier this month, the topic of how much you should let your children know about your past antics came up. (READ MORE … ) 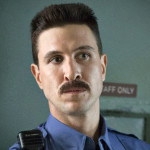 Really, we were totally on the same page and I thoroughly enjoyed his company. I liked chatting with him and watching how he talked with his hands. And he was really cute, too, with beautiful blue eyes. (READ MORE … )

5. On Being Catholic: The Mystery of Faith

My 10-​​year-​​old son had a play date after school the other day and when the friend’s mom came to pick him up, she asked if we were in a rush to get my guy to CCD. 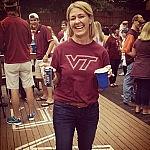 4. Old School (Or That Time I Drank Jungle Juice)

I drank something called jungle juice this weekend and as I lifted the Solo cup brimming with the icy yellow liquid to my mouth, I realized that I needed to retract a statement I made recently – that you couldn’t go home again – because dudes, sometimes it’s like you never left.

3. November is the Cruelest Month for Moms

Anyone who agrees with T.S. Eliot’s assessment that “April is the cruelest month” has obviously never spent time trying to be a mom in New Jersey during November.

This week alone, my fifth grader has three days off. Three days. I didn’t even know about one of them until this weekend. (READ MORE … ) 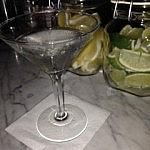 Since we met as students at the University of Delaware in the mid-​​80s, our gang of 8 friends has come a long way from our days of sitting around dorm rooms and sorority dens in oversized Forenza sweaters and big Jersey hairdos, telling each other what to do. (READ MORE … )

It wasn’t until my ex-​​husband moved out more than four years ago that my late night nibbling began.

Until then, we’d finish dinner and maybe I’d have a bowl of ice cream with the kids (I was younger then and could get away with those kinds of things) and we would have eating wrapped up by 6:30 most nights. (READ MORE … )

7 thoughts on “100 Down: Celebrating a Year of Blogging”