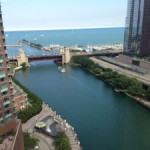 The view from my room at the Sheraton in Chicago was not shabby. Who knew a lake could be so big? #getoutofjersey

I got back late Saturday night after three whirlwind days in Chicago where I saw none of the city, other than the fabulous view outside my hotel window, but did have a front row seat to dozens of amazing and inspiring speakers at BlogHer13. Herewith, a report of what I now know: