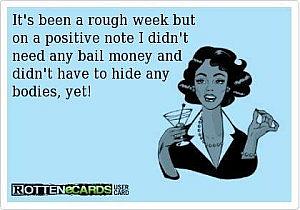 This meme pretty much sums up my last 10 days.

Here is the downside of going out nine times in ten days: you don’t really get a lot of stuff done. And while I’ve amassed about a book’s-worth of stories – oh my god, do I have some good stories – I can’t really write about most of them. I mean, you can call me up and I’d share a few of them with you, but I totally can’t put it all out there on my blog. I have a reputation to maintain, you know.

So I haven’t really known what to write about in the meantime. Even the guy I work out with, who was away on vacation last week, laughed when I told him some of my stories this morning and was like, “You haven’t written anything in so long, I knew something was going on.”

My “10 Days of Fun,” as I have taken to calling this party-thon, was a convergence of pre-planned activities that were coincidentally strung together over many consecutive days – including a dinner to celebrate some Leo ladies’ birthdays, a going away party for neighbors and good friends and my 30th high school reunion.

And there has been dancing, people, lots and lots of dancing and teetering around in high heels and as a result, walking has become a bit of an issue. I woke up Sunday morning and the first thing I said to my high school BFF, who came up from Virginia for the reunion and was lying next to me in bed, was, “My fucking bunions are killing me.”

Sexier words have never been spoken between two people lying in bed together.

But I’ve had a bee in my bonnet lately about going out and having fun. It’s like I’m going through that phase that most divorced people go through when they first taste the freedom of being single, except I’m on a five-year delay. When my marriage collapsed, instead of rushing out to party and console myself in the arms of someone else, I kind of went into hiding. I spent my time drinking wine in the homes of close friends and acting like Greta Garbo. I just hated the idea of people talking about me and didn’t want to add to things already being said. I kept my nose clean and focused on my kids and my new, all-consuming job.

And I think it’s safe to say that that was a good move. I figured out how to be happy by myself and with myself and maintain my dignity during a difficult period. I had fun, but it was more of the go-out-to-dinner or go-to-the-movies kind of fun.

Oh, how things have changed.

I had more fun in the month of July than all of 2011. I have danced to “Rosalita” on a packed dance floor on a hot Sunday night. I stood and ate cheese fries around midnight with high school friends and laughed about how much and how little had changed in 30 years. I squatted with my face pressed next to my oldest daughter’s at the bottom of an ice luge as shots of vodka raced down the chutes and into our mouths. And I kissed a guy in a bar on a dare by a girlfriend and was reminded of just how good chemistry between two people can be.

That kind of fun.

I spent my final night of fun back out with a group of friends from town to celebrate/mourn the pending departure of one of the families to Hong Kong and also trying to recapture all the fun we had at this particular bar the week before. We brought the husbands this time, too, and ate sliders and peeled shrimp on the back porch before heading downstairs to dance and drink mixed drinks out of Dixie cups. Even the guys got in on the act of being my Wingmen and interviewed my potential dance partners over beers. One poor guy had to go through so many rounds of interviews before he could dance with me that by the time he was finished, I had snuck off and found someone else to dance with.

I think some of this non-stop fun is due, in part, to my upcoming 48th birthday but can attribute a lot of my recent shenanigans to just being more open to dudes. I now realize that for a long time, I just wasn’t into the idea of guys and dating. For some reason, it freaked me out. I just couldn’t deal. But then I dated someone I kind of liked and, boom, wanted to do it again.

But I’ve always been a late bloomer. I mean, I started drinking and smoking when I was, like, 12, but some of the bigger things – like developing self-awareness and healthy boundaries – came a lot later to me than normal people.

So, you all will be happy to know that tonight, I will not be putting on eye shadow and telling my kids to make themselves pizza bagels. Instead, I plan on getting into bed early and watching a movie or starting a new book. I might not even drink.

I need to rest up, since I’m out every night for the rest of this week. There are four more weeks until Labor Day, you know.

Maybe we should call this my “Summer of Fun.”