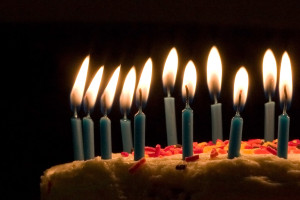 One day last week, while I was being a good girl and minding my own business, I had a startling realization: I’m about to turn 50.

Okay, not tomorrow. Or the day after that, even. But soon. In, like, one year, seven months and a day, to be exact.

Which comes out to 19 months.

In other words, there’s not much time left to find some kind of cure for this condition from which I’m suffering. You know, the one that’s making little creases appear along the sides of my face overnight and a bulge to form around my midsection no matter how many pieces of bread I forgo or bowls of Greek yogurt I eat.

I mean, I know there are worse things. I really do. There’s cancer and poverty and Je suis Charlie.

But aging is this insidious bastard who jumps out at you and tackles you to the ground, no matter what you do to avoid it. It just keeps knocking at your door until you answer but unlike a Jehovah’s Witness, you can’t hide and pretend you’re not home.

Generally, I don’t get too caught up in how old I am, or age in general. I have older friends and younger friends, both sets to whom I can easily relate. And for a while, I was a pretty equal opportunity dater in terms of a dude’s age. But I have decided of late that I can only date men who never considered wearing a seat belt for the first two decades of their lives and who grew up watching “Land of the Lost” on Saturday mornings. Any man who had 24/7 access to cartoons on Nickelodeon as a kid rather than being relegated to three hours on weekends may no longer apply for the role of my boyfriend. It’s officially creepy.

Things started innocently enough last Wednesday when my gal pal across the street came over for our usual hour-long exercise session in my living room. For almost two years we had been working out with the Girl Whisperer, who sat on the couch and ordered us around, but lately we are going it without him as he rebounds from a round of chemo and radiation he endured in the fall. The bad part is that we miss his company terribly – even those annoying times he would look at my torso and ask me what I had eaten that weekend (like he could see the Doritos). The up side is now we can talk as much as we want as we exercise without him saying, “A little less talking, a little more working, ladies.”

So as we lunged and tried to work against gravity’s attempt to push our asses down to our ankles, we chatted about my friend’s upcoming trip to Key West in March, for which she had already mentally packed. Unlike my own approach to travel – which generally finds me amongst piles of clothes tossed around my room the midnight before I depart – my girlfriend knows exactly what’s going in her suitcase down to the Chan Luu bracelet she’ll wear to lunch the third day and the drawstring pants she’ll wear on the flight home.

“Do you think my 50-year-old arms can get away with a sleeveless shirt?” she – of the slim-and-toned arms – asked. I was about to tell her, for about the millionth time, that she was being crazy about her arms being fat, but then realized it was not the first time she had said something about being 50 as we exercised that morning.

It was like that final scene in “The Usual Suspects,” when the detective looks at the bulletin board and realizes that all the clues as to Keyser Söze’s identity were staring him in the face all along. If my girlfriend had started limping, I would not have been surprised.

Because, as sad as I am for her that she must, alas, turn 50 in March, it also means one other terrible, horrible, no good, very bad thing: That I am not far behind.

My girlfriend is a year older than I and one of the benefits of our friendship – aside from the wonderfully thoughtful gifts she’s given me over the years and her ability to help me think outside the box and solve even my most vexing problems – is that she has served as a type of buffer between me and some of those ugly numbers we’ve encountered since we’ve been friends. You know: 47, 48, 49. It’s like she’s going first through the haunted house of middle age and I’m cowering behind.

But now it’s almost like she’s falling over a cliff and dragging me down into the craggy abyss of old age with her. It’s really rather rude.

So, I did what any good friend would do to help a sister out, which is to say I screamed and started stringing a series of expletives together that blamed her for making me old.

Earlier, as we did our one-legged push ups (because we are badasses), we had joked about the nightgown my younger daughter had recently given me. My 17yo had actually forgotten to give it to me to wear Christmas Eve and found it while cleaning her crime-scene of a bedroom about a week later. Thankfully no dead bodies or bloodied knives surfaced along with it.

“Here you go, MeeMaw,” she said, using the crazy nickname she has taken to calling me (insisting it’s what her children will call me some day) and handing me something red and folded. “I bought you Christmas pjs.”

She knows I’m big on the Christmas jammies – I’ve been giving them to the kids for over 20 years – but never really buy ones for myself. This year I even got a pair for my little niece and nephew who slept over Christmas Eve as well as my big boy whose Old Navy t-shirt read: Dear Santa, I can explain. 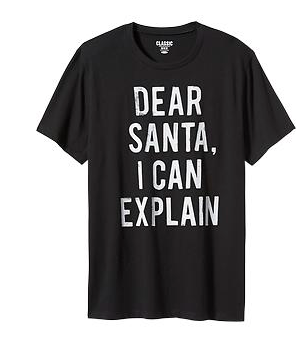 I shook out what she had handed me and discovered it was a roomy flannel nightgown, super soft with a few buttons at the throat, and festooned in cats. She told me she had bought it for me at the Vermont Country Store on a trip this fall with friends. 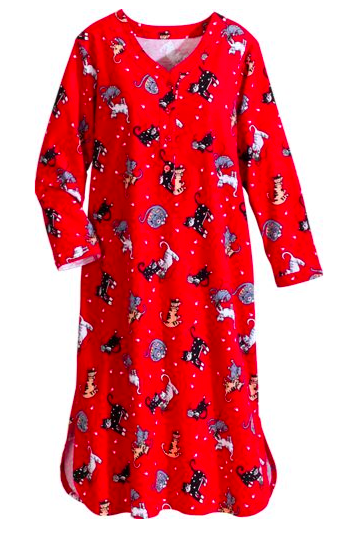 It’s probably both the wackiest and coziest item that I own – it covers my arms and goes down to my ankles – and, as if it couldn’t get any better, it also has pockets. That’s right bitches, pockets.

It is now officially referred to around here as my “Cat Suit” and, unlike last year’s winter staple – the Cheetah Suit – I am trying to retain some semblance of dignity and not wear the nightgown too often. I hate to scare the children. I hate to let them see where a series of bad choices might land them.

The nightgown, referred to on the Vermont Country Store website as “A Cat’s Life,” is also kind of like George Costanza’s “I give up” sweatpants. As if I’m waving the white flag at life in defeat.

I had started Wednesday’s exercise session with the announcement that I was officially over dudes. “Fuck it,” I told my girlfriend. “I’m going to while away my days in my Cat Suit and not worry about guys any more.”

And we were all like, “Yeah, that’s the ticket,” until we realized a short while later that I was staring down the barrel of 50 and couldn’t afford to waste one more second in a Cat Suit.

“There’s no time for that!” my pal yelled while lifting a 20-pound weight over her head and we laughed our asses off about the ridiculousness of it all. How, with each passing second, we moved closer to the inevitable regardless of the state of our arms or our tummies or our relationship status.

I guess the only alternative is to enjoy the final 50 million seconds or so of my 40s and, with any luck, all the minutes, hours, months and decades I have to live beyond that.

And maybe some of it while wearing a Cat Suit.